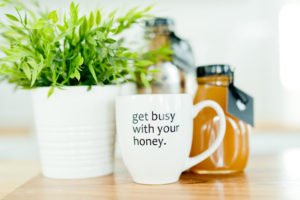 Gina Nielson and Aubrey Johnson are the business partners and sisters behind the locally produced raw and unfiltered Queen Farina honey. They are also both busy moms and nurses who like to have fun and dream big.

“Our dad was an entrepreneur and ingrained in us the belief that ‘you are what you think about,’” they said in a recent Instagram post. “We’ve always dreamed big, just like him. He left us before we started Queen Farina, but we feel him cheering us on and telling us to move forward when we feel defeated.”

Gina and Aubrey got involved in beekeeping five years ago as a hobby to keep their two families, who live on opposite ends of Cache Valley, connected with a joint project. They had two hives that year, and produced 120 pounds of honey, which at first seemed like a lot, but it was quickly divided among family and friends, and they realized the demand for local honey. Two years later they became an “official” business, and currently have 350 hives, which each produce about 40 pounds of honey each year.

Gina said they name all of their queen bees and dedicate each bottle of honey they sell to one of their hard working queens. They post the name of each individual queen on the bee box that contains her hive, then label the bottles sold so customers can see which hive the honey came from.

Individuals can “adopt” a hive for $75, which allows them naming rights of the queen. Hive sponsors also receive photos of their hive and a full frame (three pounds of honey) from their sponsored hive at harvest time. “It is both fun and rewarding,” Gina said. “It allows people to help sustain the bee population without doing the work of beekeeping.”

Gina and Aubrey have self-funded their business, and have grown slowly to avoid going into debt. Additionally, all the profits they have made to date have been reinvested into their business. “We have grown tremendously, and have had a great response from customers,” Gina said. “But it would be nice to have the means to grow a little bigger a little faster.”

Queen Farina products (which include honey, granola, lip and hand balms and other honey-related products) can be purchased online at queenfarina.com, locally at Freckle Farm, The Book Table, Island Market, First & Third and at Whole Foods grocers throughout Utah. They also sell their products at many Utah farmer’s markets and trade shows, and were especially excited to be invited to Spring at the Silos at Magnolia Market in Waco, Texas.

They honor this idea charitably. They have created The Bee’s Kneeds Campaign to educate people about how they can help sustain the honeybee population and protect nature.

Visionary Homes Continues to Look to the Future